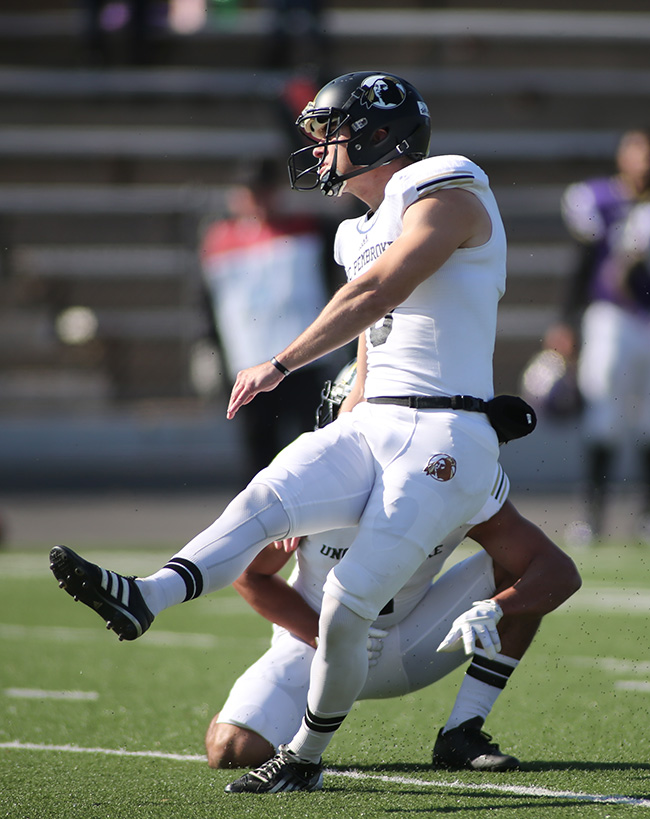 University of North Carolina at Pembroke senior place-kicker Matt Davis (from Richlands, NC) is the recipient of the 2016 Fred Mitchell Award. The Award is provided to the nation’s top place-kicker in FCS, Division II, Division III, NAIA and NJCAA for excellence on the football field and in the community.  Over 750 place-kickers are eligible.

The Award is named for Fred Mitchell, the All-American place-kicker from Wittenberg University and sports columnist for the Chicago Tribune for 41 years.  Mitchell said, “We are delighted to congratulate Matt as the third Division II kicker to receive the Fred Mitchell Award in the last four years, and the first-ever kicker from a school in North Carolina. With more than 750 place-kickers to choose from, we are extremely proud to recognize Matt among a top-notch group of nominees. Matt was at or near the top of the 750 eligible kickers in many statistical categories and scoring 119 points in a season with such a high success rate on field goals from 50+ yards is incredible. Matt’s record-setting season and collegiate career at UNC Pembroke were extremely impressive. It was a genuine pleasure for me to be the first to inform Matt that he is the 2016 FMA winner, and I could sense his humility and gratitude to his family, teammates, coaches, long snapper and holder.”

“It is a tremendous honor to be selected as the winner of the 2016 Fred Mitchell Award,” Davis said. “First and foremost, I would like to thank my Lord, Jesus Christ. All of the success that I have experienced is because of His grace and mercy in my life. None of it would have been possible without Him. I would also like to thank Fred Mitchell and the award committee for their generous considerations and my family for the unconditional love and support.”

Davis is very active in campus, civic and community service endeavors. He was hand-picked to be a member of UNC Pembroke’s Student-Athlete Advisory Committee, he volunteers to help the homeless in the community and he has been heavily involved in many Athletes in Action activities.

“Knowing the names on this long list of winners, it is truly special for Matt to be decorated this award,” said UNC Pembroke head coach Shane Richardson. “His hard work, dedication, and the commitment to be the best at what he does served him well with his performance this year. His desire to win and be a great contributor towards his team’s success was made apparent to his coaches and teammates alike throughout the season. Matt’s character has been a big part of his success, and I could not be more proud of not only the player that he’s grown into, but the person that he has become.”

The Award’s Selection Committee Chairman Rob Perry said, “There were many outstanding candidates for this Award. Matt holds numerous Division II and school records, and he even scored 13 of the Braves 19 points in a 19-18 win over Concord last month. We are looking forward to honoring Matt on February 20, 2017 during the National Football Foundation Chicago Metro Chapter Awards Ceremony.” Details for the Awards Ceremony are at nffchicagoawards.eventbrite.com.