Saint Xavier University senior place-kicker Tom Lynch is the recipient of the 2011 Fred Mitchell Award.  The Award is provided to the nation’s top place-kicker in FCS, Division II, Division III, NAIA and NJCAA for excellence on the football field and in the community.  Over 750 place-kickers are eligible. 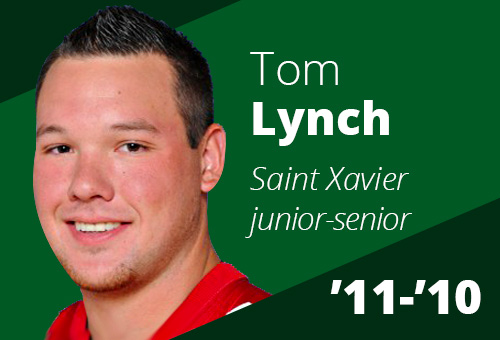 The Award is named for Fred Mitchell, the All-American place-kicker from Wittenberg University and longtime sports columnist for the Chicago Tribune.  Mitchell said, “I am pleased to congratulate Tom Lynch as the recipient of the 2011 Fred Mitchell Award, which is particularly impressive since he also received this Award after the 2010 season.  With more than 750 place-kickers to choose from, we are extremely proud to recognize Tom in this fashion.  He scored more points than each of these 750 place-kickers in 2011, he is extremely accurate and he has been instrumental to the continued success of the Cougars.  I am equally proud of Lynch’s sincere commitment to school and community service, which helps set him apart from an incredibly strong field of finalists in the eyes of our Selection Committee.”

“Winning the Fred Mitchell award for the second time puts me at a complete loss for words,” said Lynch.  “I was so thankful to be the recipient of this award last year and now winning it again leaves me with an indescribable feeling.  I truly believe that without God in my life, I wouldn’t be the person I am today, not only on the football field but also in my everyday life.  Winning this award this week and then playing for a national championship this Saturday, I could not have scripted a better ending for my college career.”

Lynch participates in the school’s annual service day where students do community service projects, he volunteers at Misericordia which maximizes the potential of people with mild or profound developmental disabilities, he provides complimentary maintenance services and volunteers at the South Bridge Community Church summer day camp, he volunteers at the Kids Enjoy Exercise Now program to support a not-for-profit volunteer-led organization that provides one-on-one recreational opportunities for children and young adults with mental and physical disabilities and he is a place-kicking tutor at his high school alma mater (Lincoln Way East).

“What a tremendous honor for Tom to win such a prestigious award two years in a row,” said Saint Xavier University football coach Mike Feminis.  “He’s had an outstanding career and is very deserving.  What better way is there to end your career than to be playing on the biggest stage possible?  I am really happy for Tom and I know he’ll save his best game for the one in Rome, Georgia, on December 17!”

The Award’s Selection Committee Chairman, Chris Kearney, said, “There were dozens of terrific candidates for this Award.  In fact, 44 place-kickers were nominated by their schools for consideration.  Tom was on the Award’s Watch List in August and we recognized him during the season for stellar performance.  The voting results were extremely close this year, and we are looking forward to honoring Tom on February 20, 2012 at Halas Hall during the National Football Foundation Chicago Metro Chapter Awards Ceremony.”