Fordham University senior place-kicker Patrick Murray (Mahwah, NJ) is the recipient of the 2012 Fred Mitchell Award. The Award is provided to the nation’s top place-kicker in FCS, Division II, Division III, NAIA and NJCAA for excellence on the football field and in the community. Over 750 place-kickers are eligible. 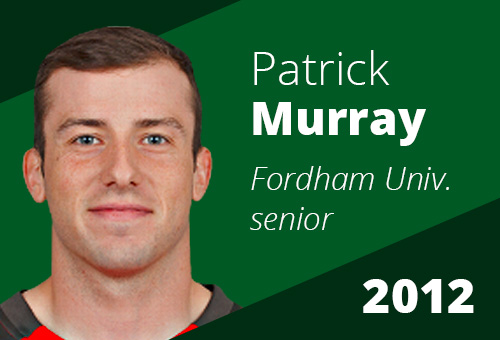 The Award is named for Fred Mitchell, the All-American place-kicker from Wittenberg University and longtime sports columnist for the Chicago Tribune. Mitchell said, “It is a thrill to congratulate Patrick as the first FCS kicker to receive the Fred Mitchell Award. With more than 750 place-kickers to choose from, we are extremely proud to recognize Patrick among a stellar group of nominees. Patrick led the Rams in scoring with 105 points, he was extremely accurate including from 50+ yards, he received seven Patriot League Special Teams Player of the Week honors and his 25 field goals were just one shy of the all-time FCS record set by Nevada’s Tony Zendejas in 1982. Patrick has focused his community service efforts on children and the homeless. Our Selection Committee is quite impressed with Patrick and we are looking forward to honoring him on February 18 in suburban Chicago.”

“When I first got the call, I really didn’t know what to say,” said Murray. “I knew I was a finalist for the Award, but when Mr. Mitchell called I was speechless. I’m so grateful just to be considered for the Award and now to win it is just unbelievable. And to win the Award as a Fordham Ram is the best thing I could ask for. This Award is not just for me but for all of the Fordham Rams, for everyone on the team who helped me, especially long snapper Joe Sullivan and holder Brian Wetzel, along with the entire offensive line who blocked for me. I am truly honored and humbled by being named the 2012 Fred Mitchell Award recipient.”

Murray volunteers at a local homeless shelter via the Part of the Solution program, he reads to elementary school students in the Bronx with teammates on the football team, he donates time to area food drives and he helps distribute toys to children in need.

Fordham head coach Joe Moorhead said, “I am very happy for Patrick Murray and his family. The Award is a testament to Patrick’s work ethic, preparation and performance both on and off the field. Patrick Murray was a vital part of the team’s success this year and I believe that his best days as a kicker are ahead of him.”

The Award’s Selection Committee Chairman, Chris Kearney, said, “There were dozens of terrific candidates for this Award. In fact, 38 place-kickers were nominated by their schools for consideration. We recognized Patrick during the season for his record-setting performance and we have followed his season closely. The voting results were quite close again this year, and we are looking forward to honoring Patrick on February 18, 2013 during the National Football Foundation Chicago Metro Chapter Awards Ceremony.”