Assumption College’s senior place-kicker Cole Tracy (Camarillo, CA) is the recipient of the 2017 Fred Mitchell Award. The Award is provided to the nation’s top place-kicker in FCS, Division II, Division III, NAIA, and NJCAA for excellence on the football field and in the community. Over 750 place-kickers are eligible.

The Award is named for Fred Mitchell, the All-American place-kicker from Wittenberg University and 41-year sports columnist for the Chicago Tribune. “Cole Tracy capped off a remarkable career with one of the most auspicious seasons in NCAA history by kicking 27 field goals in 29 attempts (93 percent), converting 67 of 67 extra points and scoring a record 148 points to help Assumption College reach the Division II quarterfinals with an 11-2 record. Combined with his ongoing dedication to community service, Tracy is an exemplary representative for our 2017 award,” said Fred Mitchell.

Cole Tracy remarked “Being one of the Fred Mitchell Award Finalists in 2015 was something that really motivated me to work harder and have more success with our team.”  Tracy continued “Winning this award is truly such an honor, and hearing it directly from Mr. Mitchell is something I will never forget.”  Cole Tracy also acknowledged his long-snapper Bryce Jacob and holder Brendan Tobey, and his coach Bob Chesney and the hard work all of the Greyhounds put in during the off-season and through tough practices he described as “harder than the games.”

Off the field, Cole Tracy is Vice President of Assumption’s Student Athlete Advisory Committee (SAAC) and was instrumental in helping the SAAC organize a canned food drive, which delivered a van full of food to the Worcester County Food Bank, helping WCFB maintain its position as the region’s leading anti-hunger organization.  Cole has also made multiple visits to the UMASS Memorial Children’s hospital to visit with patients and to provide inspiration during daunting times.

The award’s Selection Committee Chairman Rob Perry beamed that “We are blessed that we continue to attract and have the opportunity to celebrate quality young men and their efforts.  The energy that they put into their team and community makes them leaders of tomorrow.  Cole fits right in with all of the previous winners.” 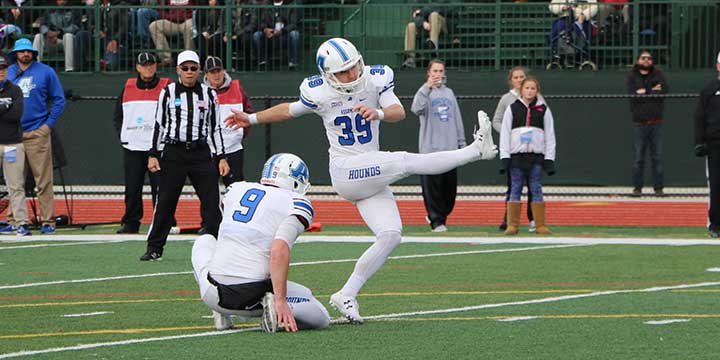 Cole Tracy By The Numbers