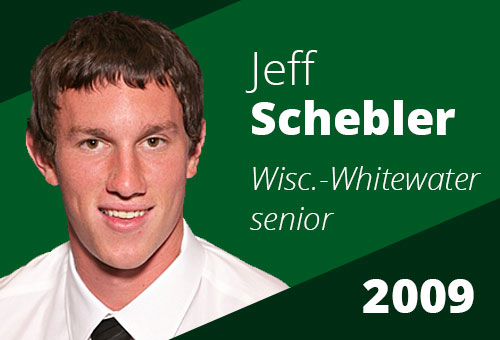 University of Wisconsin-Whitewater Senior place-kicker Jeff Schebler is the recipient of the 2009 Fred Mitchell Award. Schebler was chosen from nearly 400 eligible place-kickers in Division II and III for excellence on the football field and in the community. Schebler’s 462 career points is the most of any place-kicker in NCAA history at any level.

“It is an honor to be nominated then selected for the Fred Mitchell Award,” Schebler said.  “This is truly a team accomplishment.  The offense, defense and everyone on special teams have helped me win this Award.”

The Award is named for Fred Mitchell, the All-American place-kicker from Wittenberg University and longtime sports columnist for the Chicago Tribune. “Jeff is a wonderful person and we are delighted to honor him with the 2009 Fred Mitchell Award. His results on the football field are extraordinary, and he has proactively volunteered his time in the community as well,” Mitchell said. Warhawks Head Coach Lance Leipold added, ‘I am extremely happy and proud of Jeff for receiving the first-ever Fred Mitchell Award.  Jeff is extremely deserving of this Award, and he fits the criteria on and off the football field.  His achievements speak for themselves.”

The Award’s Selection Committee Chairman, Chris Kearney, said, “There were dozens of terrific candidates for this Award. Jeff was on the Award’s Watch List in August and he also received our monthly recognition for outstanding performance during the college football season. We are looking forward to honoring Jeff on February 22, 2010 at Halas Hall at the National Football Foundation Chicago Metro Chapter Awards Ceremony.”