Senior 80 percent on FGs, including long of 55

West Texas A&M University senior place-kicker Sergio Castillo (La Joya, TX) is the recipient of the 2013 Fred Mitchell Award. The Award is provided to the nation’s top place-kicker in FCS, Division II, Division III, NAIA and NJCAA for excellence on the football field and in the community. Over 750 place-kickers are eligible. 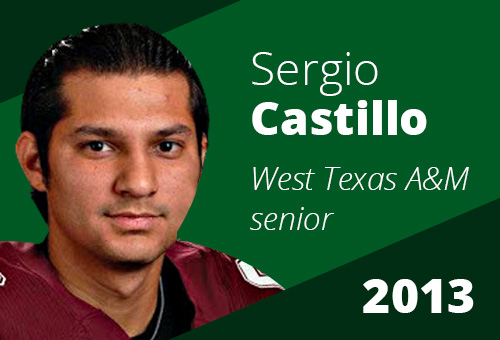 The Award is named for Fred Mitchell, the All-American place-kicker from Wittenberg University and longtime sports columnist for the Chicago Tribune. Mitchell said, “It is a thrill to congratulate Sergio as the first Division II kicker to receive the Fred Mitchell Award. With more than 750 place-kickers to choose from, we are extremely proud to recognize Sergio among a stellar group of nominees. Sergio ’s record-setting season and career are very impressive. He led the Buffs in scoring while playing a key role in the team’s successful playoff run and 11-3 record. He is a very accurate kicker, having made 62 of 79 career field goals and 251 of 255 extra points. Sergio has focused his community service efforts on mentoring young people. Our Selection Committee is quite impressed with Sergio.”

Castillo connected on 80 percent of his field goal attempts, including a long of 55, in scoring 149 points in 2013.

“I am really honored to receive such an outstanding award and it is a blessing,” Castillo said. “I am glad I can represent WT with this honor and I want to thank my team mates and coaches for the opportunity to be a Buffalo. I also want to thank the Selection Committee for choosing me for this award and I look forward to meeting them.”

Castillo volunteers weekly in the Students in Free Enterprise program to assist troubled youth with math, life lessons, college planning and job interviews. He is a regular speaker in Amarillo in the Step Up to Success program, where he counsels high school and middle school students. As a Toys for Juarez volunteer, he collects and distributes toys to children in Juarez, Mexico. He is a Huddle Leader, member of the football team’s Bible study and Fellowship of Christian Athletes member.

Head Coach Mike Nesbitt said, “Sergio is very deserving of the Fred Mitchell Award. He embodies all that is good about college athletics. His hard work, discipline and outstanding character sets him apart from anyone else. I am proud to know Sergio and it has been a great honor to coach him.”

The Award’s Selection Committee Chairman, Chris Kearney, said, “There were dozens of terrific candidates for this Award. In fact, 34 place-kickers were nominated by their schools for consideration. We recognized Sergio during the season for his record-setting performance in 2013 and we have followed his season closely. His 437 career points ranks first in school, conference and Division II history. We are looking forward to honoring Sergio on February 17, 2014 during the National Football Foundation Chicago Metro Chapter Awards Ceremony.”