Concordia University, St. Paul senior place-kicker Tom Obarski (Burnsville, MN) is the recipient of the 2014 Fred Mitchell Award. The Award is provided to the nation’s top place-kicker in FCS, Division II, Division III, NAIA and NJCAA for excellence on the football field and in the community. Over 750 place-kickers are eligible. 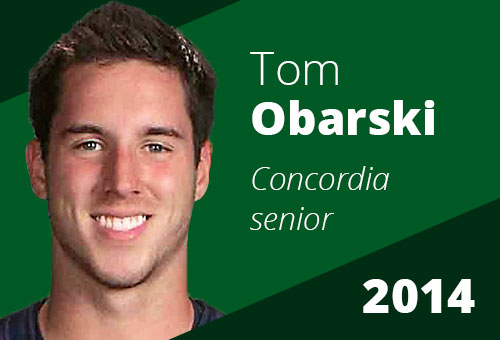 The Award is named for Fred Mitchell, the All-American place-kicker from Wittenberg University and longtime sports columnist for the Chicago Tribune. Mitchell said, “It is a thrill to congratulate Tom as the second straight Division II kicker to receive the Fred Mitchell Award. With more than 750 place-kickers to choose from, we are extremely proud to recognize Tom among a stellar group of nominees. Tom’s record-setting season and career were terrific and we recognized Tom for his performance each of his four years at Concordia. We are particularly impressed with Tom’s accuracy, consistent success from 40+ yards and his volunteer efforts with young people.” In addition to First Team All-Conference honors, Tom was also Second Team All-Conference as Concordia’s punter, Capital One Academic All-America First Team and an AFCA All-America First Team selection.

“The Fred Mitchell Award is an incredible honor to receive. God has given me a love for the game that is unmatched and has blessed me with the abilities to glorify Him,” said

Obarski. “I want to thank my family and friends who have supported me every step of the way and have pushed me to become better. I also want to thank my team at Concordia and the coaching staff for always putting trust in me.”

Obarski is very active in the community. He is a drug education mentor to middle school children, youth teacher at River Valley Church, high school camp volunteer, on-campus ministries and Bible study leader and Feed My Starving Children volunteer. He also served on an overseas mission trip, helped raise more than $6,000 for the tsunami relief fund in Japan and he raised funds for Project Rescue.

“This Award just exemplifies the peak of Tom’s accomplishments,” said Concordia-St. Paul head coach Ryan Williams. “He’s been accomplished kicker and tremendous ambassador of our football program to the campus and community throughout his career. He’ll be greatly missed in our program and always remembered for the greatness he has left behind. I hope that there are more opportunities for him to kick at a higher level. He represents everything that we strive for in our football program.”

The Award’s Selection Committee Chairman, Chris Kearney, said, “There were dozens of terrific candidates for this Award. In fact, 38 place-kickers were nominated by their schools for consideration. We recognized Tom for his record-setting performance in 2014 and throughout his career. We are looking forward to honoring Tom on February 16, 2015 during the National Football Foundation Chicago Metro Chapter Awards Ceremony.”